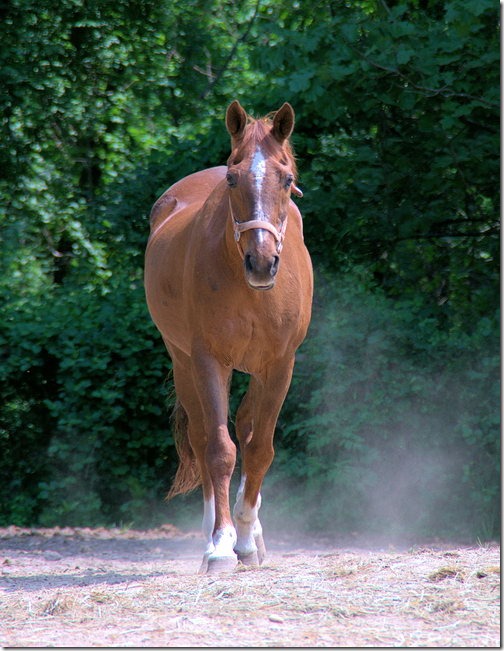 Charlie was rescued from the slaughter in 1989, when he was only around seven years old, which makes him a minimum of thirty-five years old today (but he could be older). There did not seem to be any reason for him to even go to slaughter other than that he was no longer needed. Over the last twenty eight years he taught many people how to ride. He was shown in western pleasure and made a nice trail horse. He has been retired for a number of years now so he gets to hangout with his friends who all love him. Charlie developed a problem with chewing as his teeth had flattened out due to his old age which caused him to have a condition called “Choke.” Choke is a condition in horses where the esophagus becomes blocked, usually from eating grain too fast; although they can breathe it prevents them from swallowing. Due to this condition his grain must be soaked in water to become mushy so he can gum it down. He also cannot really chew his hay because of his worn down teeth, so he just plays with it and sucks the juice out of it which is called quidding. Luckily, with so many horses living longer, they now make a hay substitute in a pellet form which is a life saver for so many of our older guys. With his hay supplements and extruded senior grains, Charlie is still going strong and is spry as anything. He has gained some cataracts in his eyes that only disrupt his vision in the dark night but that doesn’t slow him down. He is the heartbeat amongst his large group of friends.