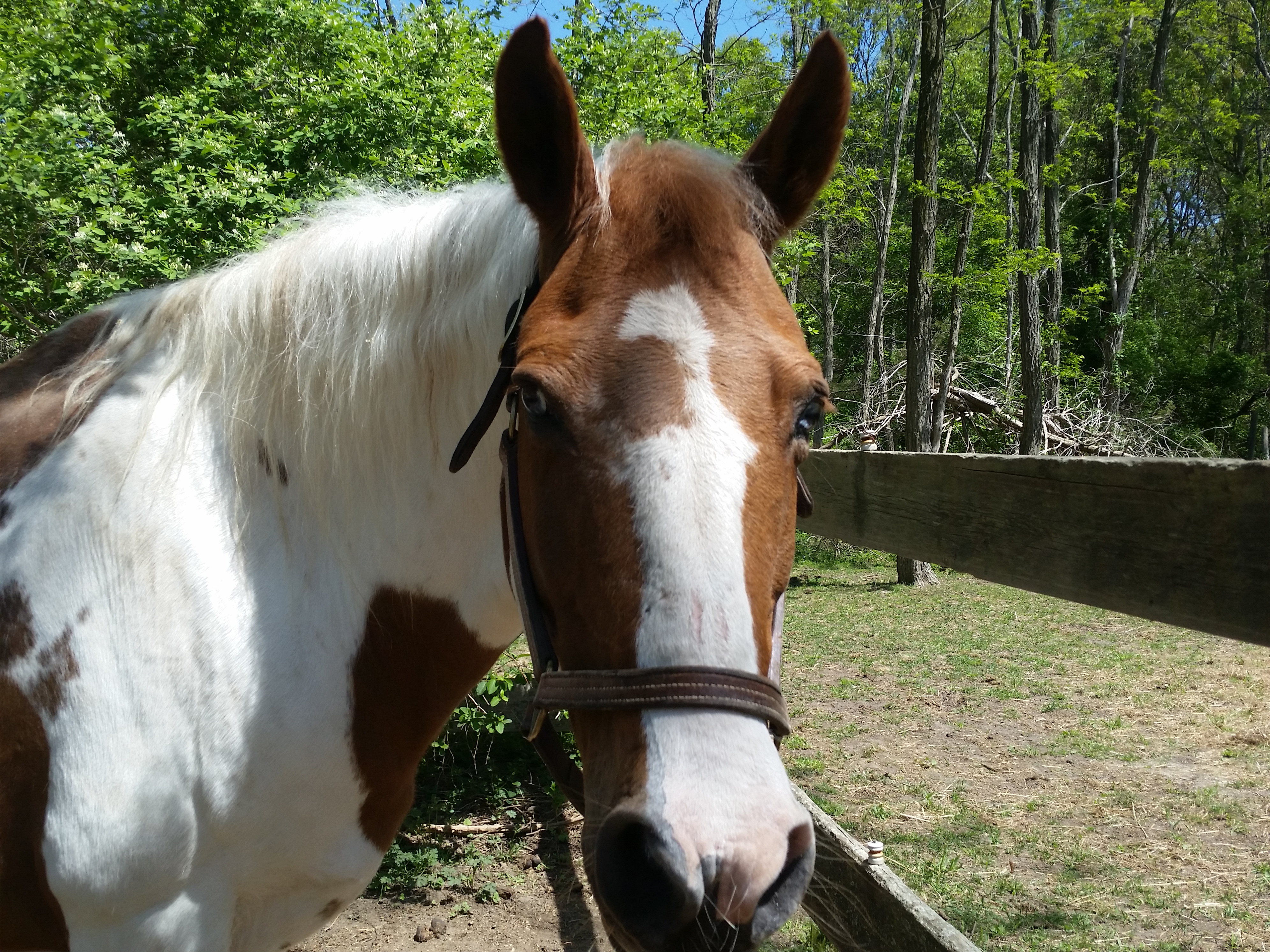 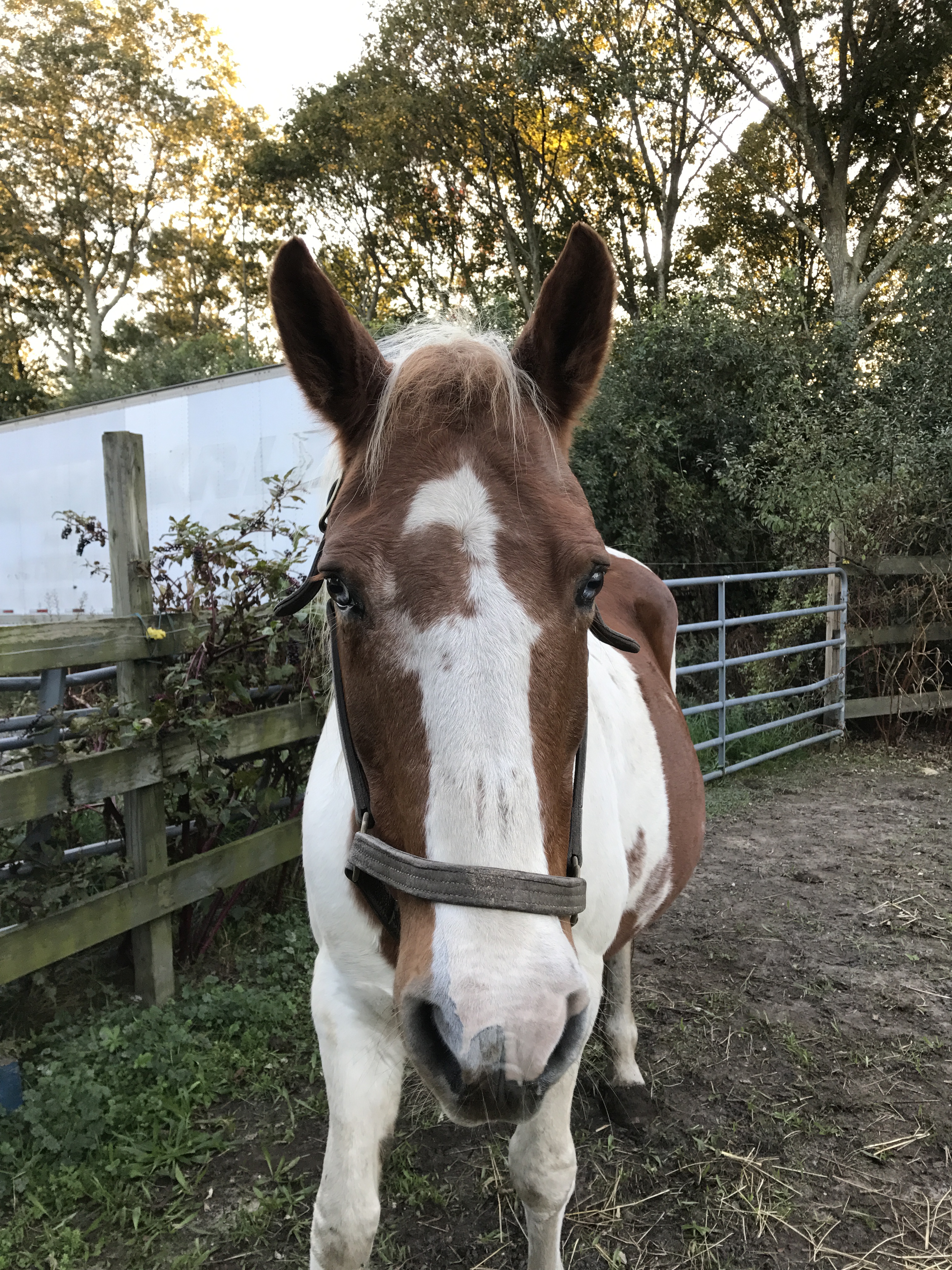 Journey’s name suits her very well. Our poor Journey girls’ life was very turbulent in the beginning. At the age of around 14 Journey was rescued from the New Holland Horse Sales in upstate New York by Project Sage and was then fostered by a wonderful woman named Kim Keogh in PA. Journey was in foal when she was rescued from the sales. When it came time to foal, Journey had a VERY difficult birth; the umbilical cord broke during the delivery so the foal had no oxygen during the birth. Kim, her daughter and another friend managed to get the baby breathing after delivery, but it did not look good. To make matters worse, Journey was not passing the afterbirth and the umbilical cord was still inside her. They were able to draw milk from Journey only a few times before reverting to Foal Lac milk replacement, and Journey was started on anti-biotics to pass the afterbirth, as retained afterbirth can kill a horse. Journey hated the shots but reluctantly let Kim administer them. She was also very protective over her weak little baby, who needed to be bottle fed every two hours. Journey retained the afterbirth for four days and when the antibiotics were not working, Kim researched and found a homeopathic remedy called Pulsatilla which she gave Journey and within hours the afterbirth was passed. The vet really felt that Journey would not make it, but she had no ill effects after it passed. They did eventually get her filly to stand after bottle feeding her for several days, but the vet warned that she was still in dire condition. Sadly, the foal passed a few days later. Nothing could be done due to the lack of oxygen. Journey was frantic. They decided to get a nurse mare foal which is basically a foal who has lost its natural mother; sort of like a foster foal. They brought in “Miles,” the foal, after a couple days Journey accepted him. After Miles was weaned and Journey was all healed she was then brought back to Project Sage. Then Project Sage needed someone to foster home for Journey. Ilene Goltzman of Brookville Farms decided to take her in. Journey was so scared and nervous around people when she came to Brookville Stables, that it took Ilene and the Brookville Stables crew years to get her to trust people. She still does not want anyone picking her back feet, but that’s okay considering what she has been through, she is such a sweet girl. Even though she is leery of people, she is not afraid of ANYTHING else.

She loves to give “Journey” kisses. Her motherly instinct has not left her as she has a very calming effect on any of the new horses that have arrived at the sanctuary and she has become a security blanket for her best friend Fancy, who is 31. If it wasn’t for the dedication, determination and love of Ilene, Brittany Rostrom, Kim Keogh, and Janet Steinhaus from Ally Equine for helping with her veterinary expenses, Journey would not be here to bring us so much joy.