We just said goodbye to Saggy on April 17th, 2015. It was very sad as he was such a sweet boy. He would have been 32 years old on May 1st. Saggy was with us almost 9 years. He was a Belmont track pony in his day and then he went on to ride both English and Western disciplines since he was such a good horse. His owner left him with us due to financial troubles. He always had a gentle nature and was able to live out his final days with his best friend, Lance. 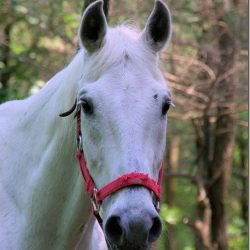 We said goodbye to Sham in February of 2015. Sham was with us for almost 12 years. April 7th, would have been his 12 year anniversary with us. Sham was a rodeo and parade horse in his day. He won all kinds of trophies and belt buckles. Sham came to us with his best friend Montana who we lost in 2014. His owner had them in his backyard and wanted to find them a home as his children weren’t riding anymore and he wanted a garage to work on cars. He put the word out, but anyone interested in them, wanted either Sham or Montana, but not both together. Since at that time Sham was about 19 years old and Montana was about 21, they did not want to separate them. We were willing to take both of them together and they remained together until Montana succumbed to the side effects of several strokes he had over several years. Sham lived the last year with the minis and pony as his friends, but I don’t think they ever replaced Montana to him. 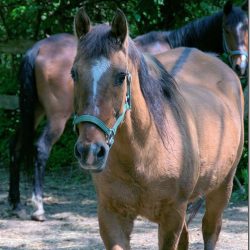 We said goodbye to Jet in January of 2015. Jet was 31 years old. Jet had several different owners in the time that we knew him. His first owner purchased him after a bad divorce and used him for trail riding and some local shows. She then gave him to a friend of hers at the barn as he had just lost his horse to a bad case of colic and was devastated. Jet was able to help replace his loss. That owner in turn gave him to another friend at the barn as his daughter was going away to school and he was moving out of the area. That owner took him to his backyard where he took Jet out on trail. Unfortunately, as Jet got older an old injury came back to haunt him and he could no longer be ridden, so he was brought to us to live out his days peacefully with his pasture mates, Skippy and Simon. The vet feels that Jet suffered a stroke and succumbed to the effects of the stroke. 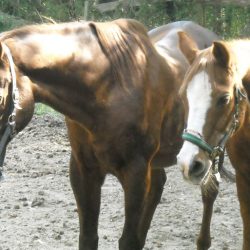 We said goodbye to Montana, a. k.a Monty in March of 2014. Monty was a special horse, not because he was a fancy show horse or won races, but because he was a stroke survivor and he was tough. Monty had suffered a stroke in July of 2010. We really did not know if he would pull through. He had a hard time keeping his balance. Our veterinarian, Dr. John Andresen, said that he was in good shape otherwise, let’s see if we can get him to come around. He did. We set up his own pen where he could be next to Sham and everyday he grew stronger. He lost some sight in his right eye and he listed a little bit, but he lived another four years and did very well. He finally had a major stroke at the age of 33, but Monty inspired everyone as he was just a tough little horse who had a will to live! 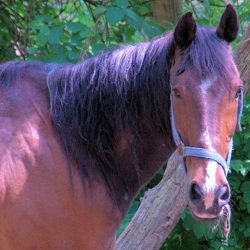 We said goodbye to Patches in May of 2014. Patches was with us for 23 years. She was found in someone’s backyard that no longer wanted her. She always had stomach issues, but we found ways to keep her comfortable and well fed. She lived almost her whole life with her best friend Princess who is still with us. They were the pony pals. Patches was always a little mischievous and impish. She passed away from a heart attack at 25 years old. 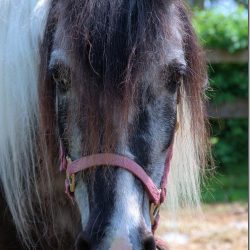