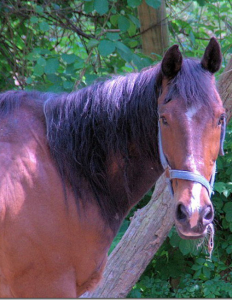 Posted at 14:30h in Memorial by Jennifer Zalak

We said goodbye to Montana, a. k.a Monty in March of 2014. Monty was a special horse, not because he was a fancy show horse or won races, but because he was a stroke survivor and he was tough. Monty had suffered a stroke in July of 2010. We really did not know if he would pull through. He had a hard time keeping his balance. Our veterinarian, Dr. John Andresen, said that he was in good shape otherwise, let’s see if we can get him to come around. He did. We set up his own pen where he could be next to Sham and everyday he grew stronger. He lost some sight in his right eye and he listed a little bit, but he lived another four years and did very well. He finally had a major stroke at the age of 33, but Monty inspired everyone as he was just a tough little horse who had a will to live!