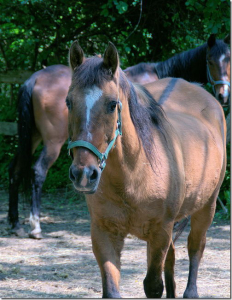 Posted at 14:29h in Memorial by Jennifer Zalak

We said goodbye to Sham in February of 2015. Sham was with us for almost 12 years.April 7th, would have been his 12 year anniversary with us. Sham was a rodeo andparade horse in his day. He won all kinds of trophies and belt buckles. Sham came to us with his best friend Montana who we lost in 2014. His owner had them in his backyard and wanted to find them a home as his children weren’t riding anymore and he wanted a garage to work on cars. He put the word out, but anyone interested in them, wanted either Sham or Montana, but not both together. Since at that time Sham was about 19 years old and Montana was about 21, they did not want to separate them. We were willing to take both of them together and they remained together until Montana succumbed to the side effects of several strokes he had over several years. Sham lived the last year with the minis and pony as his friends, but I don’t think they ever replaced Montana to him.